Drager Films makes thought-provoking films about complex characters to show every colour of the human experience to its audiences. It believes that many communities, not only geographically, but demographically, don’t relate to what they watch and looks to grow audiences through relatable and specific storytelling. 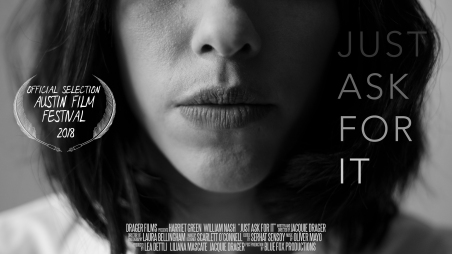 The short film, Just Ask For It, premiered at the 2018 Austin Film Festival.

Jacquie Drager is a writer and director living in London. Having come from a background of Construction Engineering and Business, Jacquie draws from the experiences she had in a heavily male-dominated work culture and tells stories through film about intelligent and complex women – many of whom don’t see themselves often represented on screen.

Jacquie is presently writing a miniseries and developing her feature length screenplay,  Scotch Eggs, which she will direct.

“It was an absolute joy to work with Jacquie. She directed with clarity and always invited questions and challenges. She was generally actor centric in her approach: curious about and adaptable to our processes and always allowed us space to play and discover.” – Harriet Green, Actor

“Jacquie was an absolute pleasure to work with. She was incredibly organised and a consummate professional who had a lovely relationship with the cast and crew. Jacquie collaborated brilliantly with her DOP, but I was most impressed by how she was with her cast. You could genuinely see an improvement in performance with every take through Jacquie’s notes.” – David Bispham, 1st AD

Never been in a better tub 😍
Current Swell’s still got it 💃🏼
⬜️ Total white out ⬜️
❄️and☀️and🐶... 😍😍😍
The glasses really complete the transformation. 🐉➡️🎄
Like taking candy from a baby, right Finn? Wait...
Celebrating docs at the Grierson Awards. 🏆
Up close and personal with Gandalf 🧙🏼‍♂️ #youshallnotpass
THIS IS MY JAM 😍 John Mayer knocked our socks off.
%d bloggers like this: